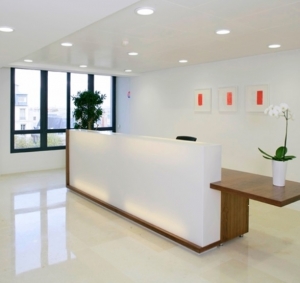 MD Business Interiors based in Exeter are the leading office furniture supplier and office refurbishment fit out contractor in Devon. We strive for excellence and customer satisfaction.

It used to be fairly easy to define space standards for offices. We could use linear equations based on the number of people occupying the building, their job function, status, access to meeting rooms, need for paper storage and so on. Things are a lot more complicated these days as the office not only serves a technologically empowered mobile workforce but also increasingly incorporates a wide range of spaces to allow people to move around the building and work in new and dynamic ways. One of the consequences of this is that the amount of space dedicated to each person has been falling for some time.

The British Council for Offices in 2014 published its Occupier Density Study, which informs the space standards laid out in its latest Specification Guide. What it revealed was the average density of workplaces in the UK today is 10.9 sq. m. per workstation compared to 11.8 sq. m. as reported in the previous survey in 2008. This is not only a marked drop in short space of time it is part of a long term trend that has seen average office densities increase across the UK from 16.6 sq. m. in 1997, a change of over a third. 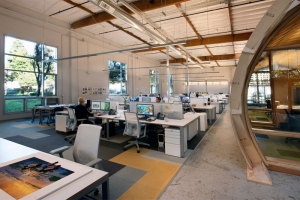 The main drivers for this change, according to the report, is the development of new ways of working which have driven changes to the way space and budgets within buildings are allocated. While at one time a typical space budget might have consisted of 80 percent fixed workplaces, 15 percent meeting space and 5 percent other space, the average office today is likely to have a greater variety of work settings, with fixed workplaces accounting for a smaller proportion of the overall space budget. The report found that this is particularly the case for the corporate, technology, media and telecommunications (TMT) and professional services sectors which have average densities of 13.1 sq. m., 12.3 sq. m. and 10.5 sq. m. compared to 9.7 sq. m. for the financial services sector.

However the report also indicates that the UK may be approaching the point beyond which we cannot shrink space standards any further. The BCO claims that while the main drivers of change remain , not least economic pressure and the growth of flexible working as well as the generalised push for more efficiency, this latest figure represents a slowdown in the rate of increase. We might be getting to the point at which we cannot reduce space standards further.

The report also highlighted the regional disparities that exist in space standards across the UK. So London and the South East of England have some of the most spacious workplaces in the UK, in spite of the fact that London has some of the most expensive office space on Earth. The research found that the South West has the highest density at 8.6 sq. m. per workstation while London (11.3 sq. m.) and the South East (12.7 sq. m.) have lower densities than all UK regions apart from Wales (11.4 sq. m.).

The upshot is that when somebody asks nowadays the ideal space standard for an office, the answer is that it all depends. It’s not that simple and a lot of questions need to be asked first before decisions about workplace design can be taken to achieve the most effective and efficient results.

The major complicating factor here is how to square off a relatively fixed resource like a building with the demands of its occupants which can change from day to day. Add in the need to keep costs down and you are left with a heady mix that drives organisations to sweat more out of their assets. But within limits, because the past few years have seen structural changes in the way firms design and manage their workplaces, away from a simple model towards something far more sophisticated. Time is no longer a fixed element that determines the way we use space. It has become a variable and that has changed everything. 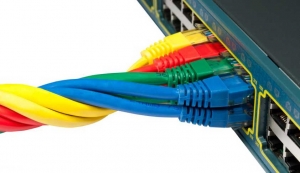 As always, it is technology that has been the catalyst. The mobile workforce is a consequence of the mobile technology it uses. Even for office based employees, something as mundane as flat screens have been a force for change by shrinking workstation footprints by around a fifth. The most obvious manifestation of this has been the dominance of the bench desk as the core element of an installation as well as the increased use of third spaces which include breakout areas, cafes and informal meeting rooms.

But increasing the occupational density of a building is not just an interior design issue. One of the major implications of change is the impact it has on a building’s infrastructure. When you increase the number of people in a given space it inevitably has a major effect on the specification of the building. Toilets have to be specified accordingly, environmental systems, heating, ventilation, air conditioning, electrical systems, escape routes, all must be dealt with intelligently.

The important thing is to understand the nature of the building, the organisation that inhabits it and the people who work there. There may no longer be a simple answer to the question of space standards, but we have opportunities to achieve more with workplace design than was the case when the world was a simpler place.