CAT5e or CAT6 cables for your office refurbishment project?

If you are reading this article, then you are already the beneficiary of Cat5 and Cat6 cables. Although these cables are used for a variety of purposes, they are most commonly used as network cables, i.e. they connect computers and servers to modems and (ultimately) ISPs. Like virtually everything else in the technology sector, these cables have undergone significant development over the years, and the newest cables are capable of significantly greater performance than previous cables. The difference between a Cat5 vs Cat6 cable is not only higher speeds but reduced “crosstalk”.

Unsurprisingly, electronic equipment (including cat cables) emit electromagnetic signals. When lots of cables are near one another, these cables can interfere with one another. This interference is referred to as “crosstalk”. Crosstalk increases errors and lost packets (among other issues). Newer versions of cat cables (i.e. Cat6 and Cat6A cables) reduce the impact of crosstalk through a variety of methods, including improved shielding and twisted cable design.

Similarities Between Cat5 vs Cat6 Cables

It is worth noting that both Cat5 vs Cat6 cables utilize the same end piece, i.e. they can “plug in” to the same ports. The differences between each of these cables are in their capabilities, as well as the methods and materials used to create them. The “end” that all the cables have in common is known as RJ-45, and it is capable of plugging into any Ethernet jack on a computer, router, or another similar device. Nobody in the industry expects this to change anytime soon. 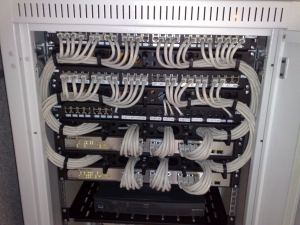 Cat5 cable is broken into two separate categories: Cat5 and Cat5E cables. Cat5 has become obsolete in recent years, due to its limitations compared to Cat5E and Cat6 cables. Although the Cat5 cable can handle up to 10/100 Mbps at a 100MHz bandwidth (which was once considered quite efficient), the newer versions of Cat cables are significantly faster.

Cat5E cable (which stands for “Cat5 Enhanced”) became the standard cable about 15 years ago and offers significantly improved performance over the old Cat5 cable, including up to 10 times faster speeds and a significantly greater ability to traverse distances without being impacted by crosstalk.

Cat6 cables have been around for only a few years less than Cat5E cables. However, they have primarily been used as the backbone to networks, instead of being run to workstations themselves. The reason for this (beyond cost) is the fact that, while Cat6 cables can handle up to 10 Gigabits of data, that bandwidth is limited to 164 feet — anything beyond that will rapidly decay to only 1 Gigabit (the same as Cat5E).

Cat6A is the newest iteration and utilizes an exceptionally thick plastic casing that helps further reduce crosstalk. The biggest distinguishing difference between Cat6 and Cat6A cables is that Cat6A can maintain 10 Gigabit speeds for the full 328 feet of Ethernet cable.

Ultimately, those who want to have the most “future proofed” cable will want to go with Cat6A. However, for most resident and commercial purposes, Cat5E and Cat6 cables should be more than sufficient.